Stuff i read on my pc while working 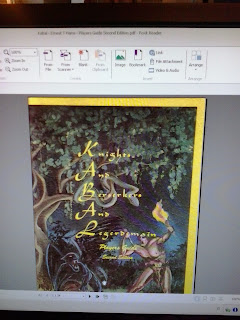 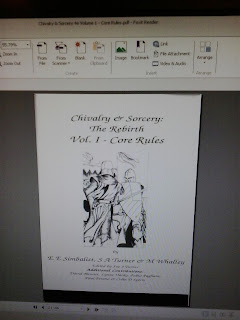 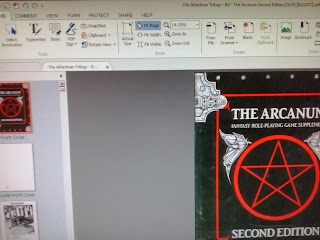 Published by Catacomb librarian at 9:10 AM 2 comments: 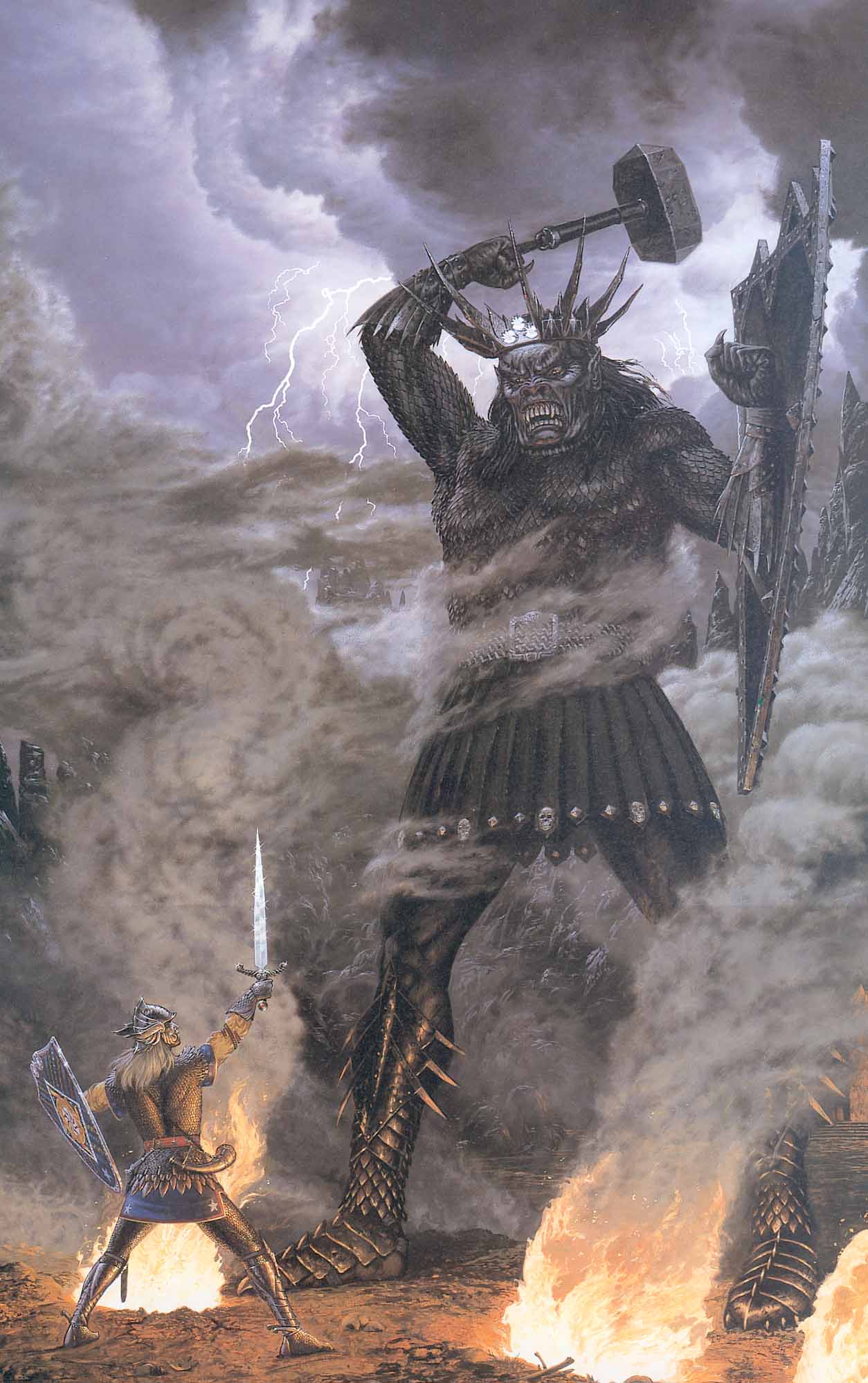 I always find myself dreaming of a game which can enable to transport players inside the Silmarillion tales. After the glorious days of Merp (which, as far as I am concerned are not expired), Decipher rpg and finally The One Ring rpg I still wonder if the Silmarillion era would be playable using these systems.

I am doubtful that a fantasy rpg specifically tailored for playing the Silmarillion will ever be published; but to entertain myself I thought about what I would want from such a game, hence this post.

Firstly, regardless of who is undertaking this job, I will just offer some generic observations, which have nothing to do with play mechanics. I could call them “corollary observations”.

While i'm certainly not the highest authority on Tolkien on earth, - nonetheless – I know I have my credential to have the right to utter my position.

These are the kind of expectations I would have in ANY case, in fact they are the same I had had for “The One Ring” by Cubicle 7 when they announced they would publish their game.

These are the minimum requirements for me which are mandatory in order to write an rpg based on Tolkien's works.

The only thing I know for certain is that if someone commits himself to such an endeavour, he should put a lot of passion in it and the task would be a long-term one.

I surmise he is a profound admirer of Lotr and The Silmarillion, otherwise he would never have thought to do such a thing. I cannot imagine otherwise.
Such a thing must be taken seriously.

This is due to the unique flavor which permeates Tolkien's work.
This consideration alone should be enough to quiet us and cause many to desist.

The decision of embarking in such a quest entails at least three things:

This should take months and maybe years (unless you are one of those few persons who can confidently affirm to be already conversant with them up to the point you deem not necessary reading).
Quote paragraphs, trying to infer possible mechanics of play from passages in the books and the like.

Even if we disagree with those works or we despise them entirely. A real scholar worthy of this name always delves into the publications available on the subject he is working on, however out-of-date, old, and incomplete they might appear.

What is risky here is the possibility of turning a tolkienian role-playing game into something unnatural.

To sum it up, it's not that I maintain that it is impossible to create an rpg based on Tolkien's “The Silmarillion”, but one can say that, as of today no one ever succedeed thoroughly and a satisfying tolkienian rpg of this kind doesn't still exist.
Therefore, any skepticism is well grounded.

Currently I don't have the energy and patience which would be required to help someone developing such a product (i'm not even sure I could be able to do it, frankly – though I studied for a great amount of time aspects of that book such as Magic in the past), so I will wait.

Good luck to anyone who dares.

HOW TO DESTROY THE PHANTOMS OF PHENOMENA

Which fantasy rpg can carry me to the dreamworld? PART II It is difficult for me to try to expound this second and final part of my post (the first part can be found here). I think it will end up being a collection of scattered thoughts and feelings, but anyhow I feel I have to conclude it.

I wrote that the boundaries and limits of the fantasy experience we are about to have when we sit at a table ready for playing depends partly on the rule-system we will be using, hence they are set up in advance. Afterwards I wrote that much as the kind of sensory experience we may have rely on and depends on the scientist who put our brain in the vat, in the same way the kind of imaginative experience we may have depends upon the fantasy rule-system we choose to adopt.

Certain subtle feelings and “cerebral joys” are not possible under specific fantasy rule-systems,because they simply cannot convey them. This was the main point of my first post, to try to highlight what I feel is a truth after having perused many old-school fantasy systems of the past.

So, I have no doubts about which fantasy game to use when I want to play a specific kind of adventure: I already know if I had better use Rolemaster or Chivalry or Sorcery or The Complete Warlock, for instance.

It follows from my previous reasoning that I regard different fantasy role-playing games as being endowed with different degrees of “illusory power”, meaning with that term the intrinsic potency of each of them to push the boundaries of reality far and far away.

Sure, all this becomes meaningless when you take into account the propensities of players and the creative, untainted sincere inspiration of a dungeon master to tell a wonderful story which is really pulsating in his heart; in that case success is almost certainly guaranteed, regardless of the system used and the facilities with which one may surround himself in order to reach the climax of a story.

But originally any rule system carries within it a different seed- and as I see it, this seed will decide (to a large extent) the otherwordly outcome of the adventure.

This is also why I have always been for the multiple choices offered by the OSR market: the existence of such diverse fantasy rpgs of the past is the most important aspect of all the OSR movement. We do have different gates to cross, and these gates do not lead to the same dreamland.

If a fantasy game is not able to carry my mind to the dreamworld then it is to no avail, and in a sense a game might even hamper this possibility.

Illusion obtains IF the total amount of disbelief (TAD) is above 78.

TAD is the result of the interactions of three main factors:

In all the other cases (that is, whereas a value under 78 is the result of the above formula, we end up with a pleasurable or even a remarkable experience at our game table, nonetheless this experience does not turn into the illusion we are seeking).

Inner aspect revolves around the detail and flavour conveyed by the rule-system used, outer aspects encompasses all that pertains to the contribution brought by participation of players, namely their personal ability of immersion in a fictional reality plus the storytelling skills of the Game master.

Firstly, you have to divide these two factors:

The result of the above division is then multiplied times the GAME MASTER'S “STORYTELLING ABILITY”. The number thus obtained is the illusory factor which is then compared to a scale ranging from 3 (incredibly poor) up to 105 (Grand Illusion).

To calculate the illusory factor, keep in mind the following:

- Players' capacity of imagination score ranges from a minimum of 10 (poor) to a maximum of 30 (superb).

As bizarre as it may sound, this is tantamount to an humble attempt to catch a glimpse of what happens when several layers of dull reality fade away whenever we immerse ourselves into the realm of imagination.

The formula above is not precise in any way, it cannot be; but the idea behind it bears some truth to me- though I cannot control or grasp the spiritual power which enfolds whilst telling an adventure and that surrounds me and my players alike, nonetheless I have the faculty of deciding which game is going to be used to reach my purpose.


Published by Catacomb librarian at 10:08 AM No comments: