I didn't think i could ever get my hands on this...well, i was mistaken.

From Fantasy games unlimited, a rarity i want to share with the rest of the world.

"A variant of FGU's Broadsword rules designed to "make possible the recreation, on a table top, of the type of battle described in Robert E. Howard's Conan stories." There are rules for magic and a section giving descriptions and army lists of the forces of the various nations of the Hyborian age." 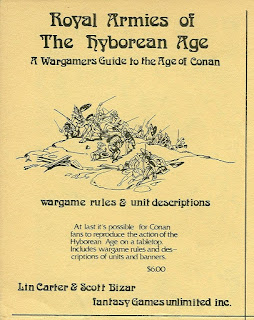 Not everyone is aware of this awesome fantasy setting, so here it is.

I started my fantasy role-playing hobby with videogames as well as the Lone wolf series of gamebooks, so i think that i will give it a shot sooner or later, throwing my players in this fascinating world.

To me, it seems so real, i don't know why but it exerts a great force on my imagination, probably because it involves my childhood memories in a feverishly manner. 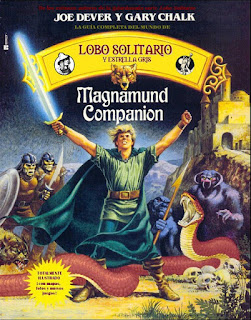 MEDIAFIRE
Published by Catacomb librarian at 6:40 AM 3 comments:

Silencing Gygax. The Boundlessness of the fantasy rpg hobby.

This is the story of Albert, Emeritus Professor of Philosophy at the Notre-Dame University of Paris.

Since his childhood, he felt profoundly attracted by speculations about the nature of reality and of the world as a whole. When he became an adult, he began attending the faculty of Philosophy. He was eager to learn and was educated thoroughly. He studied Plato, Socrates Dscartes, Kant, Netzsche, and so on.

After five years he obtained a degree. He kept on studying and after a couple of years more
he was permitted to TEACH philosophy because at that point in his career he was recognized and accepted as a teacher, as an expounder of a discipline.

He was regarded as a luminary.

After all, he dedicated and evoted many, many years of his life to the study of this subject, and he knew the history of this discipline, of this field of study.

He was delighted to contemplate all that the human mind had been capable of thinking and pondering since the dawning of mankind and the birth of abstract speculation.

At times he sat on his sofa, quietly smoking his cigar and further examining critical studies written to better explain the theories of some of the well-known and respected titans of thought which appeared centuries before and that he so eagerly admired. Schopenhauer, Spinoza,and so on...

Then, during a casual stroll on a rainy evening, while walking in a remote part of the city he lived in, he stumbled upon an old bookstore he had never noticed before.

Beyond the entance door, he found himself in an half-lit room and he realized that that was an antiquarian bookstore and he was surrounded by interesting volumes, all hoarded on wooden shelves about him, volumes worth perusing, many of which were old and second-hand.

Whilst searching, he found a dusty tome titled "Dictionary of philosophers".
He was totally unaware of the existence of such a work of reference. In fact, it was a massive and sturdy tome of about 3000 pages in lenght, which claimed to record -alphabetically- all of the philosophers who ever existed through the centuries and who had written some treatise, work, or dissertation of any kind.

Entranced he began reading, and soon Albert forgot anything about him.

He was flabbergasted when he stumbled upon the name of an Hungarian thinker died in 1820 which name he had never heard before and who had written a philosophical book whose title meant "The Impossibility of the existence of an external world".

It was specified that an english translation existed somewhere, though hard-to-find.

Albert read the synopsis and the table of contents that was provided, and he was astounded to learn the views and the kind of intricate and byzantine reasoning it contained.

Albert was confused and an odd feeling of uneasiness held him. He immediately bought the dictionary the went home.
Once gone back, he sat on his couch.The desire to obtain the precious book of that Hungarian philosopher held him spellbound, and he obsessively began to wonder why none of his former teachers ever warned him or informed him about the mere existence of such an eminent philosopher who apparently lived all his life unnoticed in spite of the fact he wrote a philosophical work which could rival Kant's works.

Why his works were not recorded and mentioned in the history of the discipline he graduated in?
Then he pondered: "I graduated in a field of study despite i was unaware of this scholarly work. Nonetheless, they generally regard me as a master of this subject, that is, philosophy. In fact, i teach philosophy every day in front of hundreds of sudents. How can this not be a shame at this point?"

For the first time in his life, he realized that no one can call himself a teacher, unless he knows everything that has been written and thought on the topic he wants to be a teacher in.

He now knew there was a huge lack in his knowledge he had been unaware of until now- a gap, a terrible void- which threw him in a state of uncertainty- in a word, he didn't feel capable of teaching anymore because he knew he was the first person who instead needed to learn again.

Studying the multitude of obscure philosophical works which he every day discovered in this formidable compendium found in an old bookstore started becoming his sole interest.

It was a question of dignity.

If he was to be called and regarded again as a teacher of philosophy, he could not be ignorant and unaware of the strange and fascinating theories written by these lesser-known philosophers which- thank heaven - were recorded name by name in the tome he held in his hands and that he cherished so much.

Yes, he knew very well Plato and Kant- and smiling to himself he asked aloud- though none was in the room except himself- : "Which philosophy professor doesn't know or has never heard about Hume, for instance? But i'm sure only a few know about "The Impossibility of the existance of an external world". the title is spellbinding, who knows which treasures might lie within?
How can they boast themselves being called professors" No, what we need is humility.
I am not going to teach anymore in my life until i will have grasped the thought of these forgotten philosophers. Only then will i find again the courage to speak before students about my subject of study".

Richard Snider, Ed Simbalist, Dave Hargrave, John Dankert, and the others: thank you for your teachings and for making me realize that no one can venture further in the fantasy rpg hobby regardless of your words of wisdom. Blind is he who accepts only one single master as his guide. May you rest in peace.
Published by Catacomb librarian at 3:35 AM 4 comments: