Celebrating the death of AD&D 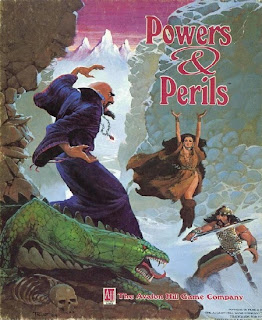 Yesterday evening it was incredible. I created at the same time 3 Powers & Perils characters. Not one at a time, but all at once. I don't know how i managed to do that, my head was about to explode.

But my players were, all in all, smart and they were collaborative. They had some problems in immediately grasping the Maximum ability concept, but then they immediately grasped the INITIAL INCREASE table which made me very satisfied.
I was a bit scared that they could lose themselves among the immense list and names of attributes.
i remember when i computed for them the formula for the Damage tolerance value! it was the hardest part, but then i told each one of them what it was, as a value.
One of the players even noticed all the formulas contained at the bottom of he character sheet and he was looking by himself on them to help compute his own values.

I gave as a gift to each of my players one ORIGINAL character sheet taken from my P&P boxed set.

I was saying that i created at the same time 3 Powers & Perils characters. It took us two hours, but we had to skip some phases such as the skills selection, height and weight, etc..

All in all, my players were good at it as i said before and they collaborated a lot with me.
Such a game can be played only by experienced players. First of all, i made a presentation of the game to my players, telling them when the game was published for the first time, telling them about Richard Snider (rest in peace), who left us just three years ago- i forgot to mention them who was Snider, how he was a friend of Dave Arneson and one of his players in the Blackmoor campaign. I even forgot to tell them that Richard Snider wrote an old fantasy game with Arneson called "Adventures in fantasy" (which i own, though never played) before writing P&P, which still has an almost "legendary" status among fans

First of all, i gave them an introductory booklet i myself created, consisting of the P&P original advertisement (this one), a photo of Richard Snider (here), and a photocopy with the explanations of the ten main abilities. Then i showed them the boxed set, from my hands to theirs )i deemed it important to enable them to experience the physicality of it), and after that i showed them the five booklets.

I then explained they could find all of them online in PDF form if they wanted to study them.

Just go to powersandperils dot org and you'll find the worldwide online community gathering all the remaining players and DM'S of this game scattered around the four corners of the globe (map is here) ,

I was thrilled while i was creating their personas. I can't explain why, but the profundity of it all startled me..i lift my head for a moment from the books and beheld my players immersed in their sheets..i couldn't tell for a moment if they were puzzled, but one thing i was sure: they forgot everything around during those two hours. Creating a character in P&P is something profound, as i said. The details are countless and you end up with a living persona which is so real that it scares you, in a sense.

I myself was engrossed in the process, and i felt a sense of joy because this game enables you literally everything, the booklets of P&P are a real interface to a fantasy environment. I would never advise anyone to try this game as a novice, but if you have been playing for several years and are longing for more, P&P exists.

...then i asked them: "Is there someone among you who has an even slight intention and who dares play a Magician?"
Playing a magician in P&P is complex 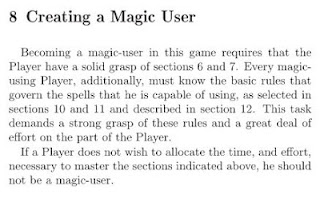 and magic is deadly.
No one wanted to do it. That's fine.

After character creation, we started the adventure.
We are going to play "Nine Doctrines of Darkness", a rare and amazing adventures written for AD&D 1st edition in 1980 and published by Dimension six. You can see it here. The plot of this adventure is incredibly enthralling!!
I have both the first and the second part, i bought the first part on ebay some time ago for 50 dollars, the second part is this one.

This is one of the most precious and cherished adventure i have. It is rare and it is hold in high esteem by collectors, and as i said the story is tantalizing. Buy it if you can. Or read here as the story goes on, because i have the intention of telling the story of our party as they play this adventure (and maybe scanning it in its entirety and put it here? Who knows).

And yes, AD&D is dead. Farewell.
"Powers & Perils", one of the greatest gems in the history of fantasy rpg's, await.

BEGINNING: The way the players meet.

Martin is suffering from an infection located on his right shoulder. This was due to a bad fighting he had recently. Possibly the blade with which he was hit was rusty or something. Martin goes to the little town of Glen, looking for an herbalist he heard of. He finds him and after a long conversation he manages to have the wound cured.

Published by Catacomb librarian at 12:08 PM

Nice to see you back. I had forgotten about Powers & Perils. I'm glad you brought it back to my attention.

I would worry about the mental health of someone who could read that first P&P extract about the natural increases and not laugh out loud.

Nothing sums up why AH should never have been allowed near RPGs than the reference to see section "1.1.4.1"!