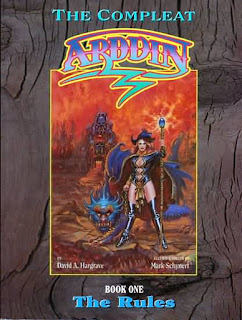 Besides this, it occurred to me that we are sort of obsessed with this concept. I was thinking as an example about Arduin.It cannot be regarded as just another take on D&D and absolutely nothing more than that.

Why do people choose to play it instead of D&D? It was conceived by another human being than Gygax, clearly equipped with a different brain

In spite of this people seem to pay more attention to the fact that it took inspiration from D&D. This must come to an end in my opinion. We are too much influenced by this thought.

People may well choose to play Arduin instead of D&D.They choose Arduin because to them it is Arduin, instead of being D&D. If they wanted to play Dungeons & Dragons, they could do that, but instead they play Hargrave's game, which is a product of another man's mind.

Maybe Arduin has another take on fireballs, another take on hit points. Maybe you get enamoured of that point of view, you heartily agree with it, you think it's the only plausible way things should be. And so you forget D&D once and for all.

But even when a set of rules simply reduces to being another take on D&D rules, where is the problem? Is it not possible that the philosophy lurking behind the tweaking of that rule is profound? People tend to reason here as if there were just an interpretation of the rules, a dogma imposed by Gygax which cannot be demolished. Ipse dixit.

What is fantasy? Is it all that Gygax uttered? But we are not slaves of Gygax's words. Take for instance the phrase written some 30 or more years ago at the beginning of this old fantasy RPG

"So, why," you ask, "put out yet another one?" Because reality (or rather the simulation of it through rules on rolling dice) is NOT just one game company’s opinion, and it is not easily defined by one limited view point. "
This i think is what is needed nowadays in the OSR- namely, that people begin to forget a little bit D&D.

I know it casts a long shadow over us, but it's possible to move to another sunny, warm location, where a differen breeze caresses us.
Published by Catacomb librarian at 11:00 AM

I think the main appeal of arduin is that it's similar to D&D but different enough to be interesting at the same time.