Runequest would be king 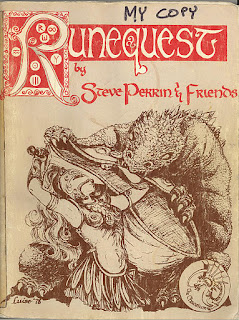 If AD&D and Dungeons & dragons suddenly disappeared and were not available in any way anymore- this is just a thought experiment- i mean, if Dungeons & Dragons under any form was abruptly removed from existence- in such an hypotetical world where it couldn't be reached anymore by any means- and no clones whatsoever as well....

in such a world, those who still would crave for playing a FANTASY rpg, on which rpg would they rely on?

Dungeons & Dragons has been banned, disappeared as if by magic, or is just unreachable and so are its many clones.
I still find myself in the position of wanting to play a fantasy rpg, so i have to make a choice.

I think the candidates would be Runequest, Tunnels & trolls and Dragon warriors (thanks to this last one having been republished lately). The war would be long in the UK between Dragon warriors and Runequest, but in the end Runequest would be king almost anywhere, sitting on its throne.
Published by Catacomb librarian at 12:45 PM