Catacomb librarian has been banned from the OSR community!

Yes, as you can see i just wrote that"if you make a search on Google you will find The Complete Warlock and Warlock tower".

In fact, you can see for yourself: it is enough to type "complete warlock" pdf, that's all you have to do in order to find the link to the 7chan board and afterwards being redirected to the proper link.

But i didn't provide ANY links, i just said that, namely- that by making a query on google will enable you to find them.

I didn't even suggest which words this query may be composed of.

This was enough- apparently, to irritate the moderator of the board (who has a blog called Greyhawk grognard IIRC) and he decided to ban me.

Yes, i canot post anymore on that board. And of course i cannot re-register.
But i don't care. You will find me here anyway.

So my friends, from now on be smart and do NOT tell anyone that if you use google you may end up finding pharmacies online where you can buy drugs without prescriptions or other nasty things. That is enough to be banned forever from a community or who knows what else might happen to you.

But whoever wants to hear me is going to find me here. I was just trying to tell people interested in the OSR that they might benefit from an important
game which was floating over there in cyberspace.
I never said where you could find it.

Here you can see the pics. 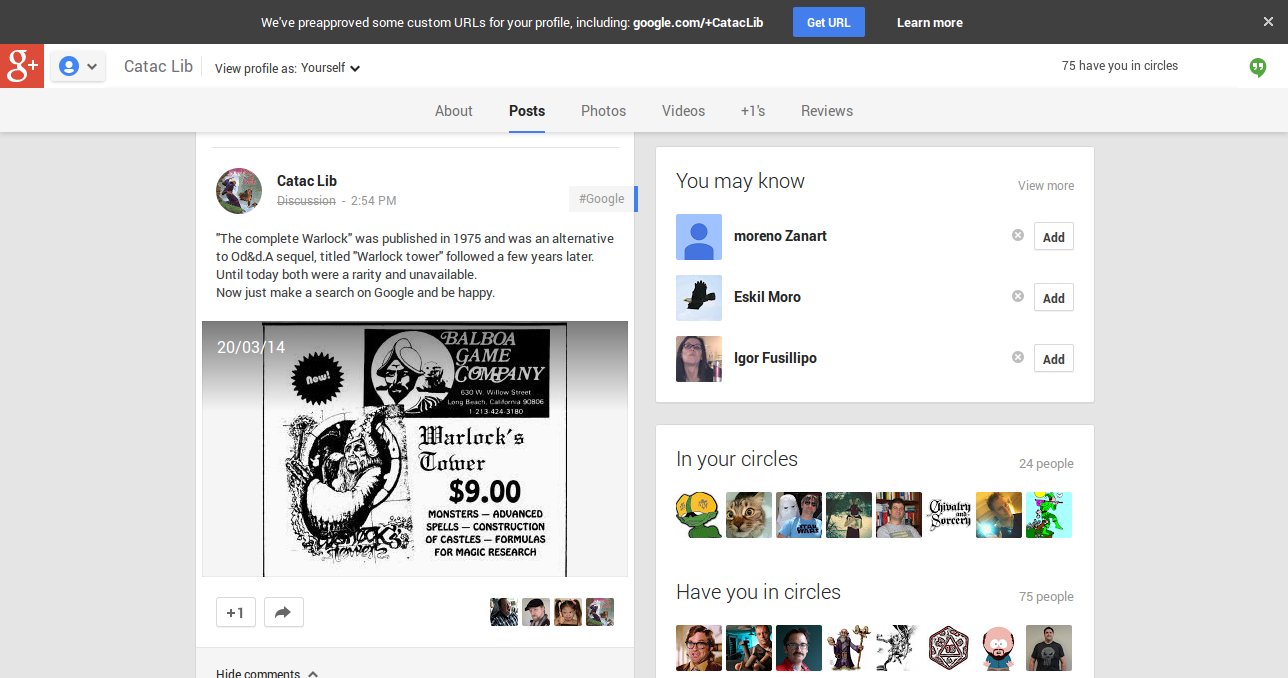 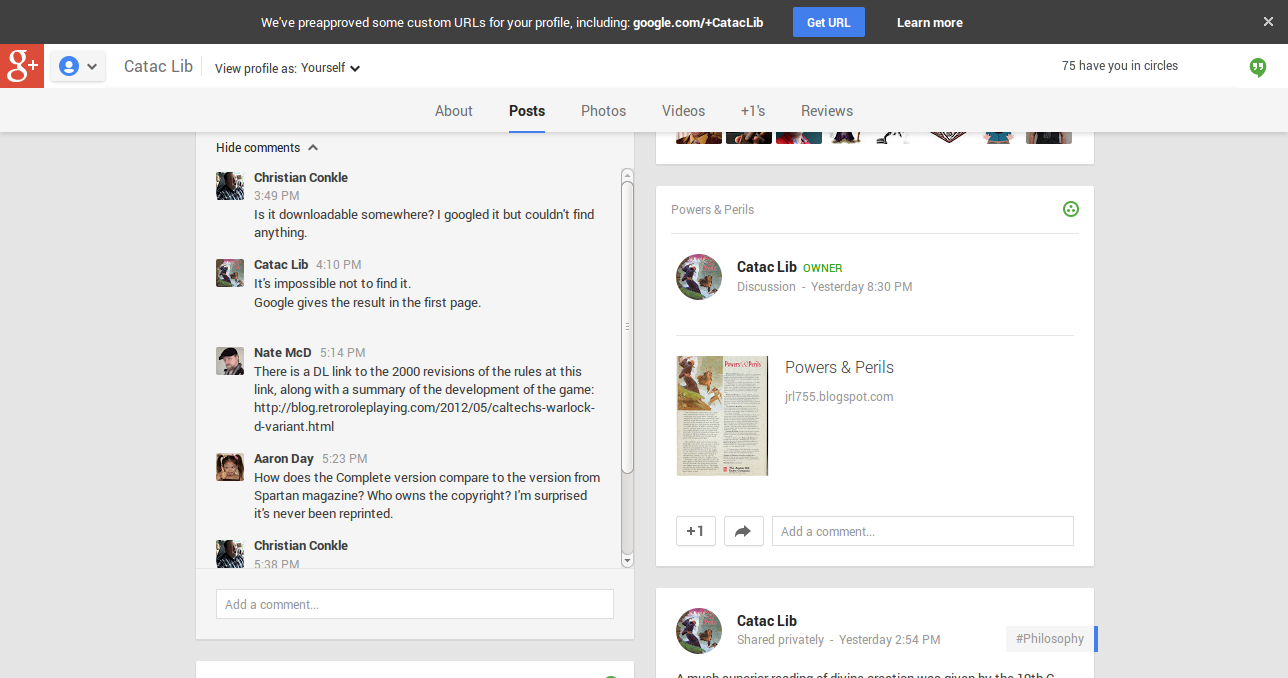 I love this ad.

Why everybody should quit playing Dungeons & Dragons

The Complete Warlock
1st ed (1975) The SPARTAN
1st ed by Robert Cowan, Dave Clark, Kenneth M. Dahl, Nick Smith (1978) Balboa, Inc.
This was a variant ofDungeons & Dragons. It which originally appeared in issue #9 of "The Spartan" simulation gaming journal as an article entitled "Warlock: or How to Play D&D Without Playing D&D". It later appeared as a product from Balboa, Inc. It had two supplements, "Warlock's Tower" in 1979 (with new monsters, new rules for thieves, and many new magic items) and "The Warlock Menagerie" in 1980 (with over 100 new monsters and other new material).

"A few years ago, the first copies of a new game called Dungeons and Dragons appeared on the market. Fantasy fans and gamers in general were enthralled at the possibilities. Most of them became hooked on the game, due to its unusual and imaginitive nature. You could actually do unusual things: slay dragons, rescue the downtrodden, and just grab loot.

When our group first started playing the game, our overall reaction was that it had great ideas, 'but maybe we should change the combat system, clarify the magic, and re-do the monsters.' Warlock is not intended to replace D&D, and, indeed, would not exist without that classic game. What we have tried to do is to present a way of expanding D & D without the contradictions and loopholes inherent in the original rules and the various supplements. By putting together one set of rule changes and interpretations and playing by them for three years, we have developed something that works pretty well. We spent a considerable amount of time working out a solid combat system, a coherent magic system, and a more flexible way of handling monsters as monsters, rather than as men dressed up in gorilla suits. We have been (rightly) accused of making D&D into a different game altogether, but we think it is an enjoyable one, and hope you do, as well."


....These are all books or games that deserve to be read and not lay in the shadows of mystery - being simply entries on a website.

All were purchased at some expense and scanned for the sole purpose of sharing them and again not letting them fall into the annals of history.

Liberated from the days of lore - I present some treasures from the early days of D&D...


Published by Philosophical slumber at 7:00 AM 16 comments:


26 What RPG based on an IP did you enjoy most? Give details.
Conan rpg by Mongoose publishing, because it has lot of geographical and historical info on the different regions of the hyborian world, and I revel in that, having been a fan of Conan comics since I was a teenager. Also, MERP because its geographical modules are still unparalleled today, and i'm sorry for Cubicle 7 but...wake me up when they will be able to publish a module such as Gorgoroth by ICE and so forth.


27 What IP (=Intellectual Property, be it book, movie or comic) that doesn’t have an RPG deserves it? Why?
Clark Ashton Smith's Averoigne or any other cycles, and Tolkien's Silmarillion. Need I say why?
28 What free RPG or what non-English RPG did you enjoy most? Give details.
Barbarian of Lemuria. Because I can recreate a Conan-esque feeling without having to pay for “Crypts & things”.

29 What OSR product have you enjoyed most? Explain why.
Among the new ones, I recently liked a lot “Bits of darkness: dungeons” that I bought on rpgnow.

30 Which non-D&D supplemental product should everyone know about? Give details.
Central casting: "Heroes of Legend"

31 What out-of-print RPG would you most like to see back in publication? Why?
Very interesting question but difficult to answer with certainty. I think the candidates are “What price glory?!” and “Bifrost”. The reason is (not taking into account their value as exceptional old-school fantasy role playing games), that both of them suffered from poor circulation in the past due to different reasons. WPG was self-published in 1978 and I suspect it circulated in no more than some hundred copies, while Bifrost (197...) never really found circulation in the U.S. It was published in UK and I recall having read somewhere (maybe it was a review on White dwarf but i'm not sure) that, as I said, in the American market was not flooded with copies of it (don't ask me why, but maybe this is a reason behind its obscurity and lack of spread).

Published by Philosophical slumber at 6:03 AM 2 comments: