The misleading history of our hobby

Whilst reading Pegasus magazine issue #8, i stumbled upon a pretty positive review written in July 1982 about the game "Beasts, men & gods" which was recently republished in its 2nd edition.

The reviewer goes so further as to say that BMG is "one of the better fantasy role-playing systems around today". Because the time was 1982, there already were several fantasy rpg's to which you could make a comparison (see here).

As for the magic system we learn that "it is extremely logical, and other systems would do well to examine this one".

The only shortcoming of the book seems to lie in the absence of an introductory adventure/scenario, as the reviewer stresses at the end of page, without forgetting to heartily recommend the game to the audience.

I admit that i've never played this game, but at the same time i am baffled by the lack of posts in the OSR blogs about it.

Being apparently a good fantasy rpg and given that it was re-released in our time for OSR enthusiasts (who should presumably rejoice when old fantasy games resurface in our epoch), to what one can ascribe this lack of interest? 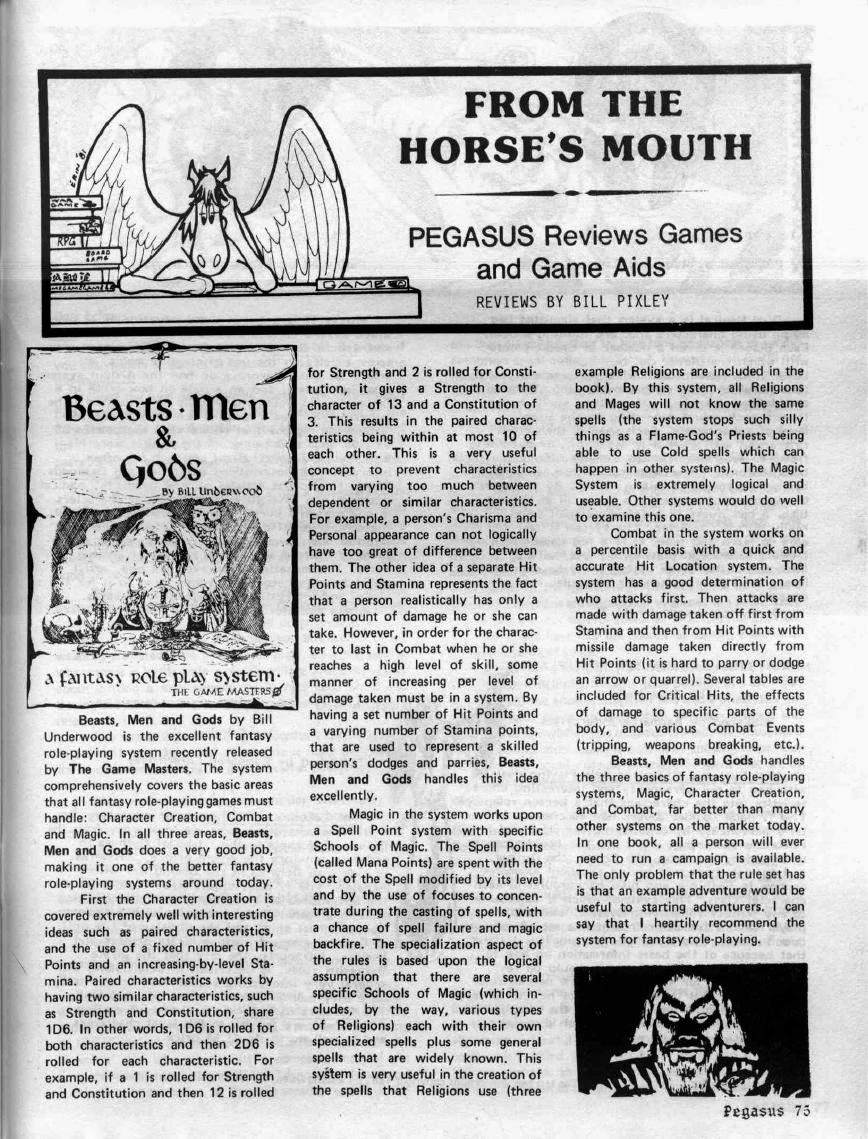 The only reason i can think of is the usual one: lack of awareness about these games of niche, as i am realizing more and more while i read Designers & Dragons (link). I was so excited about such a book when i heard about it, i purchased it and though it covers a lot of useful information it entirely skips many fantasy games just because they didn't quite "hit" the market at that time.

It is such a pity. There are so many gaps to be found in even such a great book as Designers &Dragons above.

But as for Beasts, men & gods, i suspect that there is something more to blame. We are not living in the eighties now, and we all are globally connected.

The fact that an old fantasy game, albeit available doesn't rise interest or curiosity at the very least makes me wonder that at the bottom there is a sort of psychic lethargy underlying. One more time, the history of our hobby is neglected and i surmise it will always be. The RPG encyclopedia does a better job at covering all the rpg's published through the years than does Designers & Dragons. It is to no avail to list the big games and pretend that the story ends right there, because it is just not true.

Published by Philosophical slumber at 5:41 AM 5 comments: 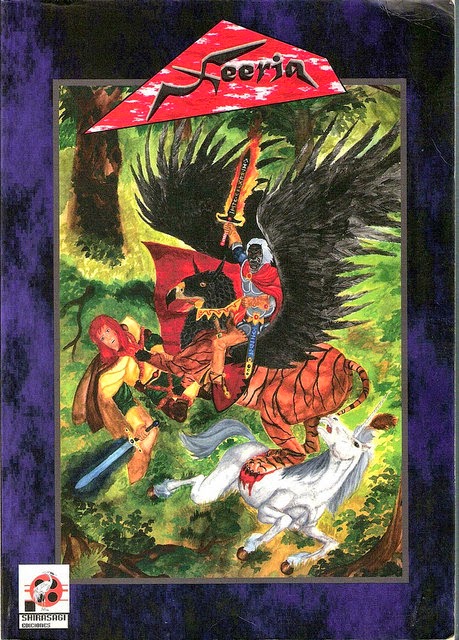 In a fantasy world, the children of the gods fought a titanic battle for dominance and survival.
In Feeria you will be a Son of Light or mighty hero of humans trying to survive in a world full of dangers while seeking ways to destroy once and for all the intrigues of the Dark.
Feeria includes rules for creating countless characters, with more than ten faerie races and many races as well as everything you need to play the first adventure after reading the rules.

LINK4
Published by Philosophical slumber at 5:28 AM 3 comments:

This blog is just AMAZING.

Published by Philosophical slumber at 2:49 AM No comments:

Well, "Sword's path: glory" is likely the most convoluted and math-heavy fantasy combat system ever developed, but i may be proven wrong since i have never read "The Riddle of steel", for instance.

Is it playable, after all? I don't know, but there surely are players willing to revel in this kind of difficult rule-systems. Unfortunately, i never really managed to get copies of the second book- and given that even on NK website it isn't available, i suppose my chances are very small.

And yes, i would definitely play this, had i the time and patience nowadays to absorb the rules.
It is no secret that i adore complicated fantasy rpg systems, and i'm sure that my acquaintance with Powers & Perils could help me a lot to comprehend this system.


Published by Philosophical slumber at 5:06 AM 10 comments: