First two bloggers that answered the call for the ORPGAD 2014

LINK 2
Published by Philosophical slumber at 9:34 AM No comments:

Ysgarth 6th edition got! (and trying to find a review - help needed)

Today i bought Ysgarth 6th edition (this one).

I already had a previous version of the game, but not complete, so i decided i had to get it. I don't know why, but Ysgarth has been on my mind recently.

I read Ysgarth for the first time after being already acquainted with Powers & Perils rpg, so i was "strong" enough to grasp its concepts instead of hopelessly drowning into it (in fact, that's what i said some time ago to my players: if you manage to grasp P&P rpg, you won't fear anything anymore).

Ysgarth is a strange combination of P&P and Rolemaster, in a certain sense.

There are a lot of formulaes (like P&P) but at the same time (particularly in the 6th edition that i bought today) there are supplemental tables for many rules (that is, first of all they describe to you the official rule and afterwards you find a table next to it where there are alternate approaches that you can choose instead of the standar mechanic).

Ysgarth fascinates me a lot and maybe it will replace in my heart the postion currently held by Powers & Perils someday in the future.

In the meantime, i was quite surprised in not being able to find Ysgarth review neither in Dragon magazine nor in White dwarf issues.

The only review that i could find was in a Space gamer issue (#83).

How is this possible? Am i just blind or can you help in finding other Ysgarth reviews?

I find it odd that there exists only the SG review of this game, albeit Ysgarth has never been a well-known fantasy rpg.

And now i have a copy of the rarest old school fantasy rpg ever published.

and some photos that i took today: 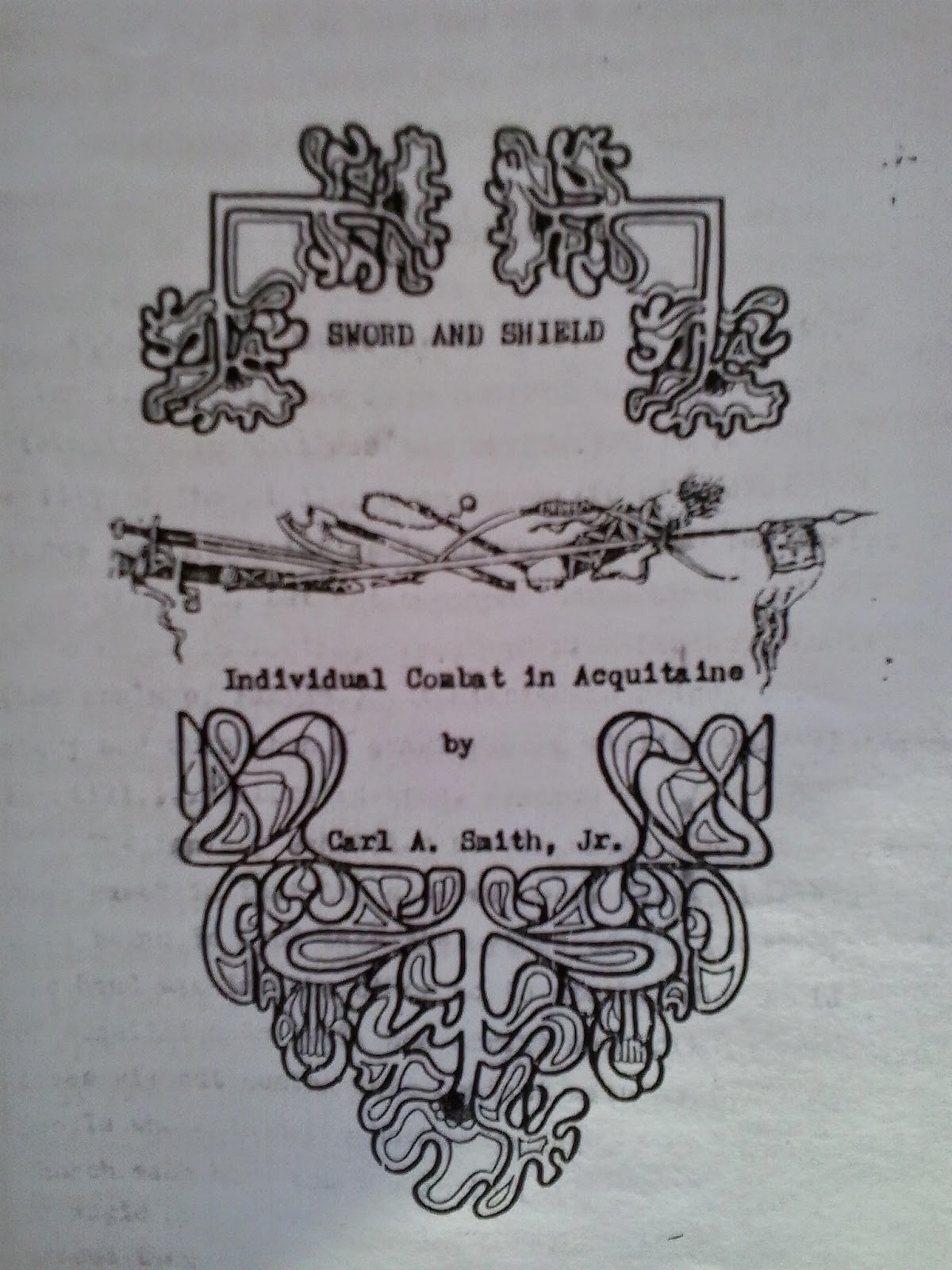 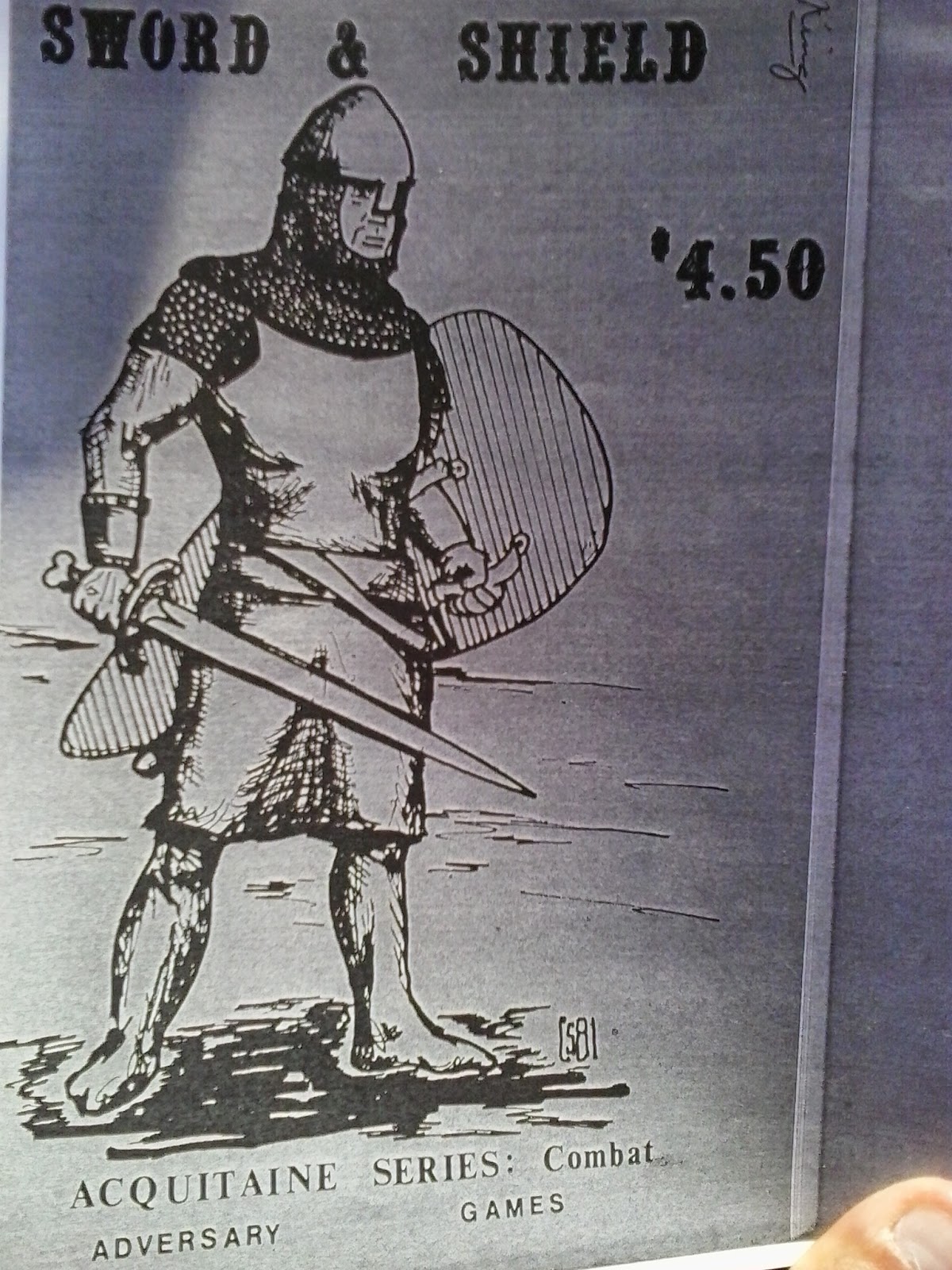 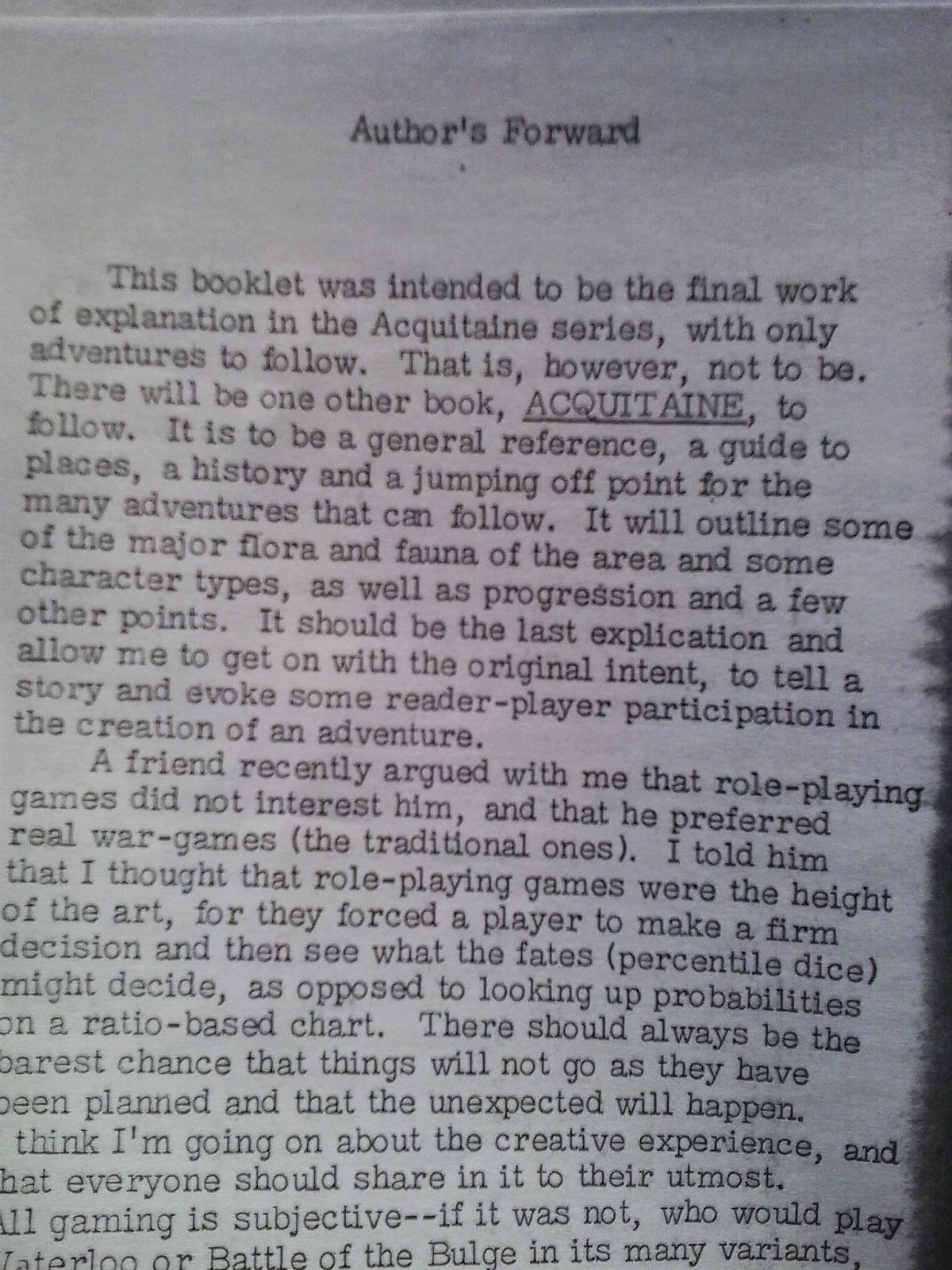 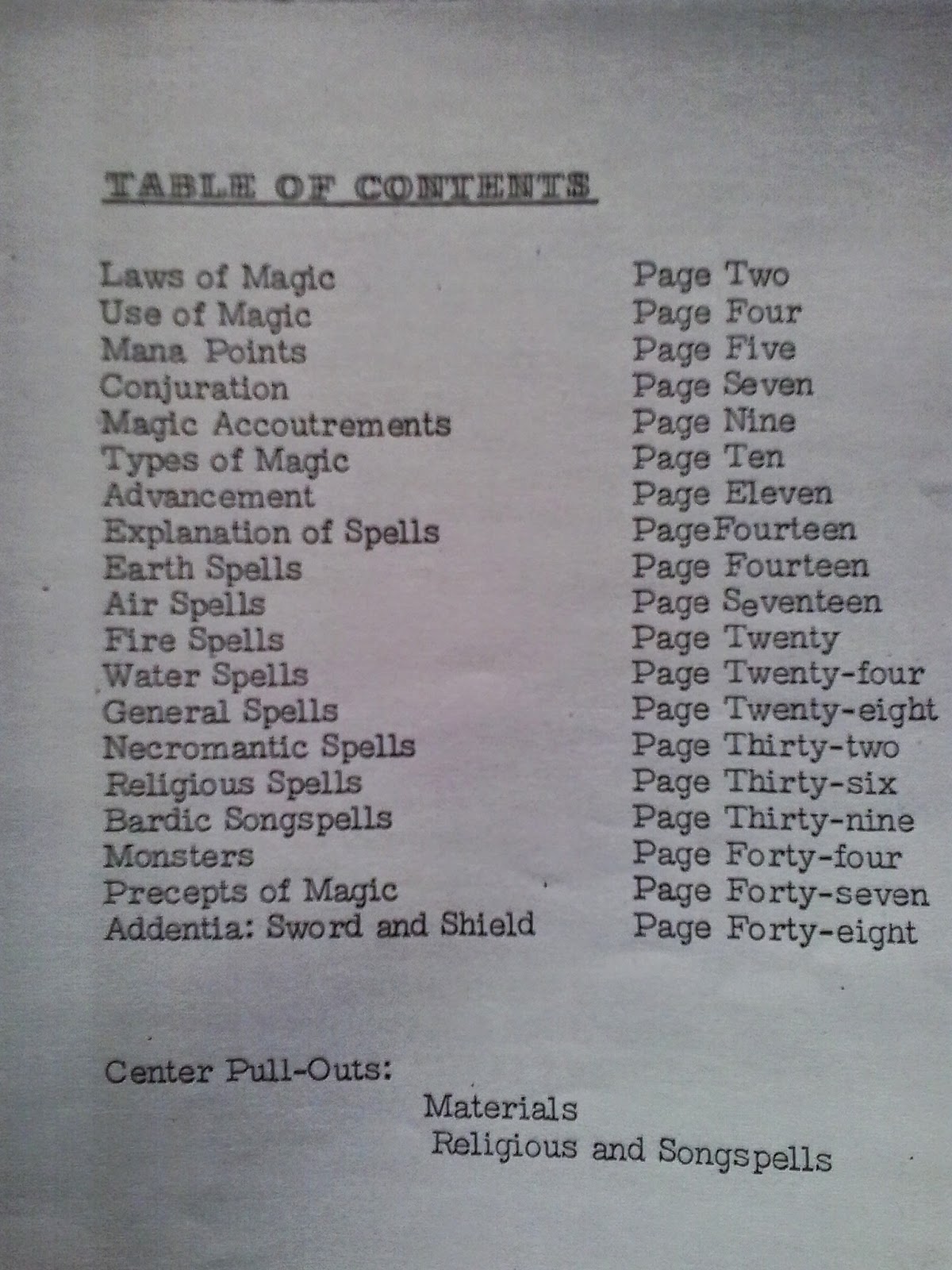 Now you may ask what i would like to do with all the rare material that i have: in particular, i am referring to Acquitaine (see above photos), Nimolee (an alternate version of OD&D that i managed to obtain some months ago), What price glory!?, and Bifrost, Castle perilous, Daemon (an obscure fantasy rpg from 1987 no one seems to be aware about - link here)

I would like to write some clones based on some of these games in the future, or at least share this knowledge in some way.

It took me years in collecting all these precious obscure games and they should really be played nowadays in 2014 by OSR fans, believe me because i gave each of them a cursory reading and i realized their potential.

In the meantime, my original 1984 boxed set copy of Phantasy Conclave is waiting for me and hopefully it will reach my abode soon.

After that happening, i wil say farewell to my collecting obsession because there won't be anything left in the field of old fantasy rpg's that i miss.

You are advised, don't stay here if you want to listen to anything dungeons & dragons related!

Enjoy your stay and become a follower if you want to know all the rest. 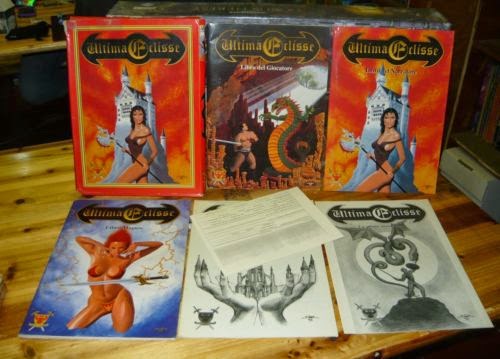 This was the first contest.Remember?

Every blogger who wish to participate in the event, will have to write a post centered around an obscure/lesser known old-school fantasy rpg, of the kind i write about here on my site (to get a rough idea)..

The post can contain anything related to that game: a rant, a deep analysis, new material, much like the posts created by enthusiasts from all over the blogosphere one year ago.

The game must be fantasy genre and must have been published between 1975 and 1989. These are the two basic and mandatory rules to be followed.

You have 30 days from now to make your post.

You may have noticed that some hidden gems has been recently unveiled by me on these pages, so you have an advantage now, since you could dig something out of those games as well.

I will choose the best post among those that will be published and then bestow my gift.

So, time to share the love for obscure fantasy role-playing games of the past!

You have plenty of time ahead of you to write your shining post. Good luck.

The gift this time will be a surprise for the winner.
Published by Philosophical slumber at 5:15 AM 8 comments:

Who gets the first swing? (Dragon magazine 71) 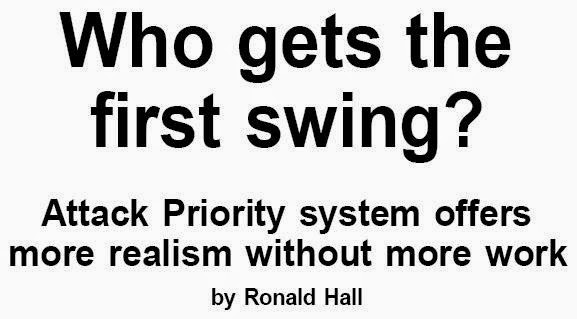 I'm adopting this method for initiative, as found in Dragon magazine issue 71.

Inititative in Powers & Perils is normally based on weapon lenght, whereas the clever method presented in that issue has separate tables for weapon lenght and weapon speed when you are in close combat situations.

I know that that article had been praised somewhere and so i decided to give it a read. It's cool, and it even has tables for all of the monsters found in Monster manual for ad&d 1st edition.

So, what i did was basically to change the weapon lenght values as found in book II of P&P and i used those values as weapon speeds instead.

Once you got to know what weapon speed you have (fastest weapons are thrown ones, which get a WS of just 1), you subtract from that value your bonus in strenght and dexterity and at that point you have your "attack priority number".

You should subtract your "experience level" as well, but i skipped those passage because in P&P the speed of monsters attacks is based on their OCV (same as hit dices in AD&D), so i couldn't add those value for calculating the total speed of player characters in combat, otherwise they would have add an obvious advantage over monsters.

If you use a slow weapon (such as a two-handed sword), you start with a weapon speed of 8. Let's say you are a strong fighter then you have bonuses of +1 both in strenght and dexterity, so your actual attack priority value is 6 (8-2).

You roll 1D10 for initiative. The lowest score, the better. You roll a 5, so 5+6=11, that's your initiative speed total for that round.

I decided to only use the IN RANGE modifiers and not the CLOSING modifier from the article cited, to speed up things a little bit, but all in all i'm pretty satisfied at how initiative now works in my game, because i thought the rule in P&P was limited, for the simple reason that it took into account just weapon lenght and consequently a character with a longer weapon ALWAYS attacked first in each round. That seemed a little weird in my humble opinion.

Yes, Powers & Perils is almost perfect as for rules details (together with its closest rivals Rolemaster and Chivalry & Sorcery), but sometimes you found odd rules even in the most detailed systems.

Published by Philosophical slumber at 5:03 AM 4 comments: