All the Melanda stuff in one picture

While i wait more time before deciding which old fantasy rpg to review (see last post below, i think i will wait for at least one or two weeks), let's have a look at this wonderful picture. 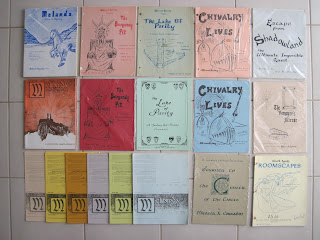 Published by Philosophical slumber at 5:27 AM 4 comments:

Ok this is sort of a challenge which is useful even to myself in order to understand how far i can push my boundaries.

At the same time it might be useful to someone out there as well.

So, i started blogging in September 2011 so this is still a somewhat young blog, nonetheless i already had the opportunity to write about such diverse little known fantasy rpgs such as Bifrost, Melanda, Sword's path glory, Castle Perilous, and others.

But this is just the beginning! In fact, at times i have the feeling that i didn't even started to really blog the way i would like to . There are so many obscure fantasy rpgs i must talk and write about (not taking into account the ones mentioned above, which deserve a more profound treatment in words and they will certainly have it), i have literally tons of other obscure fantasy rpgs in my collection that i never mentioned.

You know, too much to do, too little time, as usual. But several times i gaze at my collection and i see some jewels staring back at me, as if they asked to be put out there under direct light in order to be known and to be spoken about loudly to the masses.

Really, as i always said, Dungeons & Dragons is just the tip of the iceberg.
Deep below there lie treasures dormant and unknown.
My aim (sometimes i feel it to be a duty but maybe i'm a visionary) is to unveil them here, one at a time, because no one did it or because it was done somewhere on other blogs but in a cursory way which does not suffice.

So i took it as a duty to open this blog, even if -as is known- i'm not an english mothertongue so at times it is "painful" to me to properly convey my ideas and thoughts in this language.But i want to do it.

I am a solitary kind of person, i have always been, i don't really feel the need of company most of the time, and this may be felt reading my blog where i almost never ask for things to others. No wonder that i called this a personal diary, instead of calling it a blog.

But i found many new friends since i started blogging and several of them often send private mails to me to share ideas and stuff, so i think today it is time to make an exception and i would like to make a poll.

Name your obscure FANTASY rpg from 70s or 80s that you want to know more about and i'll see if i can help.

The only rule is: it must be a FANTASY game, its rules must be written in english language, and it must have been published between 1975 and 1989. (see here for help).

happy poll to everyone.
Published by Philosophical slumber at 1:51 PM 15 comments:

Could Powers & Perils reach a new audience IF?

..If every single boxed set that originally appeared in the eighties, was scanned and distributed (shared) online?

I mean, not only the "Powers & Perils main boxed set" (first image below), but "Book of tables" and "Tower of the dead" as well:

Why am i saying this?

Basically, because on the "official" Powers & Perils" website, you can freely download the main boxed set and (if i recall correctly) part of the "Perilous lands" boxed set, and that's it.

There are still two boxed sets missing.
If all at once ever published for this game was made available online, could this have an impact? The last two boxed sets mentioned have never been available on the net before.
Published by Philosophical slumber at 3:15 PM 2 comments:

What i will be writing about this month and next one

I have been writing a long post about something that i had in my mind and which i felt the urge to speak about. It is a somewhat convoluted train of thoughts, which resulted in a bizarre theory of mine.

As said, it took me days and weeks, it is still in draft form but i actually was not in a hurry to write it, because my ideas became clearer and clearer as days passed.

I think this will pop up next week or so.

Another post i'm going to write about in March is a long "dissertation" (divided in two or three parts) on Dungeons & Dragons original combat system and how i "fixed" it (because of dissatisfaction with it).

Yes, there was a time when i myself played this game (and it is likely i will play it again soon for some reasons).

There existed some "alternative" combat procedures and combat systems for Dungeons & Dragons, conceived decades ago by minds other than mine, which not everyone may be aware of ( i assume this, since i can't seem to find references to these on blogs and forums), so it's time to talk about this topic.

And i think these combat systems put the last word on how D&D combat should be.


Published by Philosophical slumber at 5:45 AM 6 comments: