18 years of development ROA claims to be the most realistic fantasy rpg on the market today. 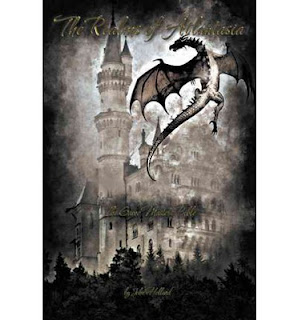 Honestly i didn't expect this, and i am intentioned to peruse deeply in this matter: It is called "Realm of Atlantasia".

"This is the culmination of 18 years of work," he said about the self-published 544-page The Game Master's Bible, which delves into the world he created, Atlantasia.

Holland had come up with his medieval fantasy world in anticipation of writing novels set in Atlantasia, but became frustrated after finding the popular RPG Dungeons and Dragons (D&D) was not challenging enough.

"When I got bored with D&D, it's like, OK, put novels on the backburner, let's get a real game going here," he said.

Holland says other companies' RPGs are "passé" and "too generic."

"To tell you the truth, I'm really not in this for the money," he said. "I'm in this to do a David and Goliath. I'm going after the big boys."

He's marketing the game as the most realistic fantasy based role-playing game (RPG) on the market.

In his game, called The Realms of Atlantasia, realism means bows are less useful in the rain, armour rusts and horses die if not cared for.

"Your weapons and your armour take damage in battle," he said. "You've got to get them repaired."

"As realistic as I can get in a fantasy-based world, we have added it in this," he said.

Like in real life, players won't find the same stores everywhere they go, and similar stores don't have the same prices and merchandise, he said.

And players have to make sure characters practise their skills or their characters won't develop as quickly as they could, said Holland.

Holland has introduced exchange rates into his game, something he says no other role-playing game has done before.

There are 900 spells in the game, and there are many more to come, he said.

Out of the 52 monsters introduced in the game, 44 of them nobody has ever seen before, he said.

Holland has many supplementary books he wants to publish to give his game a more "3D like experience."

The supplementary materials include a dictionary for each of the languages he's come up with, atlases, and books on potions and poisons.

Holland wasn't always sure he was going to complete even the first book, let alone others that delve into his world.

"I got halfway through the 900 spells and I thought I'm never going to get this done, and (his wife) Alisa just kicking me in the butt," he said.

He said he was getting disenchanted dealing with publishers, but when she found a company with which he could self-publish the book through IUniverse, it became a reality.

The Game Master's Bible is available online, both in print (for $44.95) and ebook (for $3.99). Holland is selling it on the website www.realmsofatlantasia.com, the iUniverse website, www.iuniverse.com, where it can be found by searching for The Realms of Atlantasia, and the websites of large bookstore chains including Chapters, Indigo, and Barnes and Noble. The soft cover book is $44.95, and the ebook sells for $3.99.

The next steps are to get the book into game stores in southern Alberta, and then onto the shelves in the large bookstores, he said.

Holland plans to auction a signed first edition, complete with documentation and a case, on eBay sometime in December.

REALM OF ATLANTASIA
Published by Catacomb librarian at 2:41 PM

Why do people feel the need to infuse realism into fantasy-based worlds? It's fantasy for a reason.

Hello Catacomb Librarian. You had tried to contact me by posting a comment on my "Mini Adventures" blog. I have added my e-mail address to my Blogger profile, so feel free to contact me through there. I'm digging your "Sirens" blog. Ciao.

I love complex games, i'll try and have a look at ROA. In any case, i feel esteem for anyone who is willing to write more than 500 pages of a game, regardless of the results.

To me this is almost like a 'perfect storm' of an RPG that's going to fail.

* Is the designer a failed fantasy novelist? Yes.

* Is he proud of how realistic it is? Yes.

* By 'realistic', does he mean 'complicated'? Yes.

* Does he seem to have played any game other than D&D? No.

PS The website is still up, so...maybe not cool to pirate it.

PS The website is still up, so...maybe not cool to pirate it.

Fair point anarchist and I've deleted my comment. I'm not thinking clearly lately and so am not sure why I posted the link. I would normally only post links to OOP stuff. Thanks for the reminder.

perdustin fantasy has not relation with unrealism, that would be soft scifi.
The idea of fantasy is about stuff science doenst allow.