I will unearth Melanda to the world once and for all 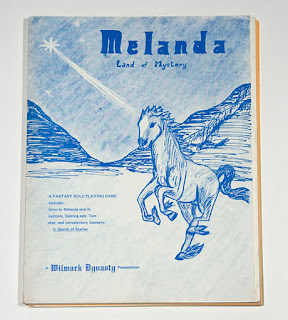 The secret sect that used to play Melanda has always baffled me. Every person who has had the chance of seeing it with his own eyes/ or who actually played it said that it was a game ahead of its time.

On RPG.net a guy says that: "Melanda, Land of Mystery, was published by Wilmark Dynasty, and had nothing to do with D&D (other than it being an RPG). As an earlier poster noted, it was a game ahead of its time. I participated in numerous campaigns run by the authors, Lee and John, back in 1982 - 1985 in an upstairs room of their Days of Knights store. The game is rules-light and fast-paced, unlike AD&D, requiring a minimal rolling of dice to determine outcomes. Until I discovered Risus, Melanda was my game of choice as a DM."

Melanda has remained a mystery to me for a long time and i started craving it. What was it really like?
I tried to contact the author (i found his mail on the web), but to no avail.
But, again: who were these guys who played this obscure fantasy rpg, and why did they choose to play it while everyone else was playing Dungeons & Dragons?

In fact, i could summarize much of my personal feeling and my personal history in the hobby of fantasy role-playing games saying that i have always wondered why there were more than one single fantasy rpg. If it was to be the authoritative text, no other games should have dared arise (and pardon my english with its bizarre structures).In any case, had i never pondered such an apparently obvious question deeply, i would never have stumbled upon the gems that shaped my life as a player and DM.

So, much like philosophy, there had always been different theories and positions, different points of view- thus, no one could utter to have the final truth.But i digress.

Let me turn to the bible of our hobby.
I have my copy of Lawrence Schick' "Heroic worlds" next to me right now.
I open it on Melanda entry:

"Fantasy system that was several years ahead of its time (my note: Melanda was published in 1980). Ability scores are determined by what skills the character studies as a youth, the combat system is likewise quite original. Perhaps most innovative is the rune-carving magic system, in which a character learns various magic runes that modify and act on each other to create varying effects."

It seems that Melanda even devised the magic system adopted in Ars magica seven years before it.

And then, behold! i found a 1st edition of Melanda on ebay here that ended for 112 dollars! yes, it is rare, very rare, the true collector knows what it is and is willing to pay for it. 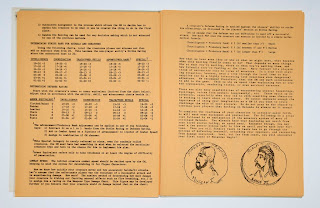 And then, there exists a review of Melanda, published in DF, here.

Besides,a fellow player wrote to me some time ago:

No dice are involved in the determination of your character's stats; they are determined solely by your character's race and selection of skills. A Fudge-like descriptor is associated with the numerical stat, which the GM can use to determine whether a character succeeds or fails at a task.

Players are supposed to begin by coming up with a character concept, and then choose a social class and skills that fit that concept. Non-humans have three social classes - elite, privileged, and common. Humans have a fourth class: the dregs. Race and social class determine the number of points available to buy the skills a character learned during youth. Humans get more points, but each non-human race has a number of 'native skills' that all characters of those races acquire for free. Characters of all races get 6 additional points to spend on skills acquired during adulthood. Some skills are unavailable during a character's youth, depending on race.

A character's combat stats (Strike Base and Defense Modifier) are determined by cross-indexing Manual Dexterity and Agility on a table. Personal Energy Points (as Melanda's hit points are called) are determined by race and Physical Condition.

To hit in combat, roll greater than or equal to (your Strike Base - your foe's Defense Modifier).

Damage is determined by how good your attack roll was and the weapon your character is using. Armor makes you easier to hit, but protects you from critical hits; if an attack's damage exceeds your armor protection, you take a critical. (All hits are critical hits if you aren't wearing armor.) The severity of a critical hit depends entirely on the damage class of the weapon, not the actual damage rolled. (I'd use a house rule taking into account the amount by which the actual damage exceeds armor protection, so that the large weapons wouldn't necessarily lop off limbs or crush skulls if the damage only barely exceeded armor protection.)

The actual effect of a critical hit depends the location of the hit. Hits in the heart or skull (as opposed to head) cause instant death; there's a 1% chance of being hit in either of those locations, so you have a minimum 2% chance of dying from a critical hit from even the smallest weapons. The only hit location table given is for humanoids, so creative interpretation of hit locations is required for non-humanoids.

Rune Science: create magical effects by combining runes; types of runes: nouns, verbs, modifiers, transitions; the rules for determining the effects of spells are extremely vague - basically, it's "GM decides" with a few vague guidelines. In the one example given in the rules, a sea captain easily shrinks an attacking giant fish "to mackerel size" with no saving roll or anything for the fish. There are no spell points or castings per day or anything to limit the use of rune science. A presented, rune science seems overly powerful, but I guess it all depends on what the GM allows.
-------
I like their rules for summoning spirits and demons and creating undead. Their background spirits, demons and the undead would explain demons and undead in original D&D very well. I'd like to adapt D&D magic to Melanda and run a game using Melanda characters and rules with D&D spells.
------------------

I will share more about Melanda in the future, since i'm going to peruse a copy and play it.

Published by Philosophical slumber at 12:40 PM

Please, tell more about the game, that sounds interesting.

Was the review Sullivan's? http://www.panix.com/~sos/rpg/melanda.html

i will post more about Melanda i promise, it's one of those hidden gems in the history of FRPG.

As one of the creators, I'm pleased the game still stirs interest among role players. I am available by email for queries and/or comments on Melanda and/or its scenarios.

Thats my grail game but like most grails it shall never be found at least for me.

There is a snowballs chance in the City of Brass of me paying $100+ for it and its not out in PDF.

I have to say though I love the concept of having ones background determine ones stats, I'd use it with maybe a bit of point buy or random in a heart beat.

I played Melanda at DoK around same time. Live in Lewes now and can't find anyone that would like to game :(

someone PMed me some weeks ago asking for some Melanda scans, so it's likely i will put something later on the blog :)

I want to search thru my books. I think I have the Melanda book (minus the cover) stored away somewhere

Just got this in the mail today (2nd Edition). Interesting reading so far. Maybe one day I'll get to play or run it.

nice to hear, let us know if and when you play it

Ive updated my blog with a detailed explanation of RUNESCIENCE and Anda Kai. Its a very poetic system and world. The fudge like description of stats almost hits, but the players usually know their actual numbers.