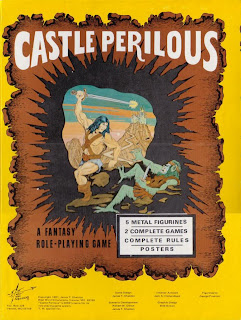 THE CASTLE PERILOUS is one of a new breed of fantasy role-playing games - basic,low-priced rules, with scenarios and complexities to be offered in low-priced supplements.
The basic set does have all rules needed for combat, magic, monsters, and treasures. Encouraging true role-playing, over 1/4 of THE CASTLE PERILOUS is maps, fiction, and factual information -for the express purpose of stimulating creativity.

Players must strive to enact their characters,and try to learn what the character would know. ("You say you're tying up the unconscious bandit? Here's a string, show me the knots." "You say you're making a knight's saddle? Describe how and what it will look like.")

The combat rules are unique and easy to use: There's a "bracket number" for hitting each armor type,improved by increased fighting level, higher brackets allow more numbers rolled on three dice to score a hit. Contingencies such as missiles, weapon length differences and fatigue are swiftly resolved by die roll.

The magic rules are fascinating: Players must describe six parameters of a spell (such as color, hand motion,physical manifestation). For each one missed there's that chance on the throw of a die that the spell doesn't work.

That most fascinating feature becomes THE CASTLE PERILOUS' downfall. Players want to play magicians, not be magicians. They resent memorizing trivial details to cast spells. Similarly, they expect quantitative measures of success, such as experience points, to depend on concrete criteria rather than abstractions such as what a character "should" know. Other problems in THE CASTLE PERILOUS come from its adherence to the use of fighting levels in which character advance as they accumulate experience. Hit points, damage inflicted, spell
potency are multiplied by level. Thus, low level charaeters are helpless, high level characters invincible.

THE CASTLE PERILOUS has much to recommend it. You get an interesting set of rules for a low price.
But most people will not enjoy the vague descriptions meant to encourage imagination, or the requirements to memorize spell descriptions. There's potential here, FRPG referees can get valuable ideas, but the average
gamer will probably be happier with other products.

There's potential here, FRPG referees can get valuable ideas (this phrase summarizes what i myself think. "Castle Perilous" is not for the average gamer, but the ideas therein contained are fascinating indeed. When i play in a Tolkienesque setting, for instance, it is mandatory to utter elvish "formulae" in order to cast incantations).

Published by Philosophical slumber at 6:52 AM

I wouldn't mind memorizing spell components... I'm always looking for ways to set magic apart from being like any other attacks... have it be less like technology... less dependable, more immersive.
Plenty of games have elements of memorization so I don't see an issue.

OMG! I thought I was the only person to ever buy this game, way back in the old days at the Compleat Strategist in NYC. I never got to play it since I wasn't impressed with the mechanics. I also thought it a bit juvenile, with "mini posters for you to color".
Instead I created a Runequest/Ysgarth hybrid, but that's another story. . .